CNN — Ironically enough, the coolest new iPhone feature Apple announced this week might prevent you from having to buy an iPhone at all. When iOS 15 arrives this fall, iPhone users will be able to invite folks on non-Apple devices to FaceTime video calls, ever so slightly lowering the walled garden that can often make it difficult for iOS and Android users to communicate seamlessly. 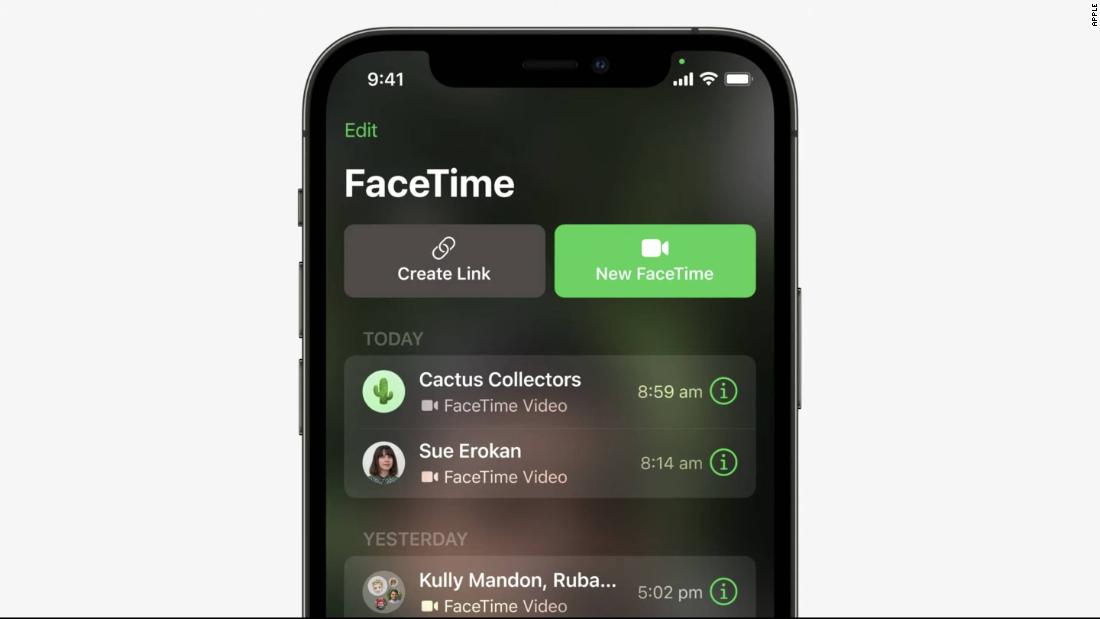 While this is great news for iPhone owners who can now bring more friends into the fold, it also means that those outside the Apple ecosystem don’t have to splurge for an iPhone, iPad or iPod Touch just to take advantage of FaceTime. Here’s why iOS 15 gives non-Apple fans a big reason to hold off on an iPhone, as well as the caveats that come with using FaceTime outside of the Apple bubble.

FaceTime calls are getting a number of promising upgrades in iOS 15, including Spatial Audio for better voice separation on a call, and a noise isolation option that aims to reduce the amount of outside racket that gets picked up.

But the most notable change to FaceTime is the fact that folks on Apple devices will be able to create, schedule and share links to join calls. If that sounds familiar, it should, because it’s pretty similar to what you can do on apps like Zoom and Google Meet. And pretty much anyone can jump into FaceTime calls with those links — even if they’re on an Android phone or Windows PC.

There are some caveats to this. Those using an Android or Windows device will access FaceTime via a web browser on either Google Chrome or Microsoft Edge, which likely won’t result in the same smooth, app-based experience you’ll get on an iPhone or Mac. The device and browser both need to support H.264 video encoding. And some of the more exciting FaceTime upgrades, such as the SharePlay feature that lets you watch movies and listen to music along with friends on a call, are still exclusive to Apple devices.

But the fact that Android and Windows users can get in on something as notoriously locked down as FaceTime is a pretty significant shift for how Apple’s software usually works, and gives Android fans in particular one fewer reason to feel like they’re missing out on iOS. It also makes good on Steve Jobs’ promise when he unveiled FaceTime back in 2010, when he noted that it would be an open standard. This update doesn’t fully bridge the disconnect between the two platforms — Android users will still have to deal with the green bubble of shame when texting their iPhone pals — but it’s certainly a step in the right direction.

This update also happens to arrive at a time when Android cameras are better than ever. The Samsung Galaxy Note 20, our runner-up pick for the best phone you can buy, has an excellent front-facing lens that might even make your friends with older iPhones a bit envious when you join the FaceTime party. Factor in other great camera phones we’ve tested, such as the Galaxy S21 and Pixel 4a 5G as well as PC webcams like the Logitech C920, and you have a ton of dependable options for looking great on FaceTime calls — even if you opt not to get an iPhone or are making the switch from one.